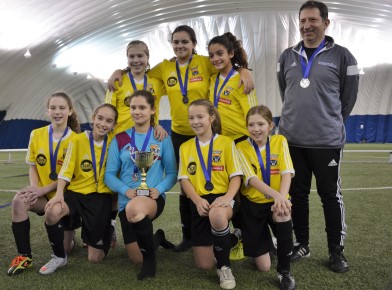 This past weekend the Westmount U13F Warriors played in the Lac Saint Louis Indoor Tournament. The tournament featured high calibre  teams from the LSL region and from elsewhere. The team  played the entire tournament with only one substitute, which is all the more remarkable as they haven’t played together since September!

The girls played the pool stage games on Saturday, winning all three matches against FC Trois Lacs (3-1) , Cumberland Cobras from Ottawa (2-1) and Point-au Tremble Jets (4-0). They were the only team in the U13FA division to qualify with a perfect record.

On Sunday, the team played the semi final against Ile Bizzard, winning 3-0 in a difficult match.

In the final, they girls faced the Cumberland Cobras again (having beaten them 2-1 the previous day). After conceding an unlucky goal early on , the team pressed hard the remainder of the match and came close several times, but were not able to tie the game. The Cobras goalkeeper saved 3 clear breakaways. At long last our girls were running out of steam. The final score was 0-1.

The girls were  disappointed, but they were  proud of this latest accomplishment. Wonderful parents were terrific and supportive all weekend!

Follow on WordPress.com
#WSCCHALLENGE Home workout! All you need is a soccer ball! 1️⃣30 toe taps on the ball 2️⃣10 Burpees (reach for the stars ⭐️) 3️⃣10 Push ups (NOSE TO THE GROUND) 4️⃣10 juggles with the ball! Do this 3-5 times and BAM; workout + working on your soccer skills! Tag @westmountsoccerclub on insta! #WSCwPride 🔥🖤⚽️ • • • • • • • • • • Westmount Soccer Club is the future 🚀 Summer 2020 Edition
We would like to send our love, but mostly the biggest THANK YOU we can muster up for our essential workers! 🙌🏽 From food services to delivery services to medical services and so on; we could not do this without you and know that we are grateful and thankful for all you do ♥️ #WSCwPride 🔥🖤⚽️ • • • • • • • • • • Westmount Soccer Club is the future 🚀 Summer 2020 Edition
It is moments like these, where no matter the jersey colour, we stand together, unified and respectful of one another. Sending love, positive energy and hopes to everyone in and around Montreal and abroad. Sportsmanship is something we teach in sport, but it also helps us learn how to be part of the bigger team, a global citizen, doing what we can for our team! #humanity #WSCwPride 🔥🖤⚽️ • • • • • • • • • • Westmount Soccer Club is the future 🚀 Summer 2020 Edition
%d bloggers like this: