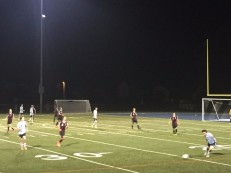 The U17 boys played one of their best games of the year, visiting FC Trois Lacs on Wednesday, August 10th. What made this victory especially impressive is that the Wanderers’ roster was down to 10 boys, so the team played short one man on a hot humid night, while FC Trois Lacs had 4 spares on the bench. In addition, FC Trois Lacs had easily won the previous match 6-0. However, Westmount had different plans for this game under the direction of coaches Mehdi and Xavier.

Westmount held off the FC Trois Lacs’ storm in the first half, with our goal-keeper, Will, making several spectacular saves to keep the score 0-0. FC Trois Lacs eventually scored on a perfectly directed header from a corner kick, making it 1-0. The first half ended with Westmount starting to gain momentum, with Evan hitting the post with a few seconds left in the half.

In the second half, Westmount kept the momentum with striker William scoring a sharp angled goal, after receiving a long pass from midfield and running through the defense. With the score tied 1-1, Westmount kept pressing Trois Lacs, which resulted in a penalty kick being rewarded. Although the kick went wide, the Wanderers were not rattled and continued to press. Striker William scored his second goal off Tima’s free-kick with 10 minutes left to make it 2-1. Trois Lacs frantically tried to tie the game, but Westmount’s defense, led by Paul and Tima, held the fort until the final whistle blew.

Mehdi and Xavier did an incredible job of getting the most out of the team in a difficult situation! This was a game where each and every player pushed above and beyond what was expected. Congratulations U17 Wanderers!